A decade ago, we posted about a “micro-scoping view of the Catholic population.” It has been enough time that we felt we needed to update this.

Both the General Social Survey (GSS) and Gallup estimate that 22% of U.S. adults self-identify as Catholic. As of July 1, 2022, the Census Bureau estimated that there were 332,838,183 residents of the United States and that 77.8% of them are ages 18 and older. Applying these two percentages to that population total we estimate that there are 56,968,583 Catholic adults in the country. If we assume the children of some of these adults have similar religious affiliations to their parents then we expect that there is likely 73,224,400 Catholics of any age in the country.

Some might note that you can’t be unbaptized and there are also those who no longer self-identify as Catholics. We can use the General Social Survey to estimate how sizeable this population is. A total of 33.9% of U.S. adults indicate they were raised Catholic. With 22% continuing to self-identify as Catholic that means 11.9% of U.S. adults formerly self-identified as Catholic but no longer do so. This is equivalent to 30,814,825 adults who were presumably baptized but no longer consider themselves Catholic (we cannot estimate the number of minors who have left the faith and are now former Catholics). That also means the total population of people baptized Catholics in the country is 87,783,408 (some were baptized outside the U.S. and later immigrated here). 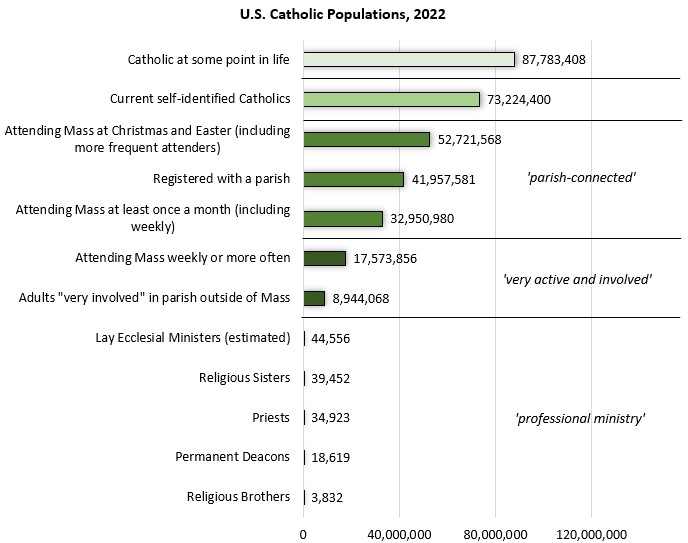 The next group you can zero in on are what we call “parish-connected” Catholics. These are self-identified Catholics who attend Mass with some frequency and most register with a parish. At Christmas and Easter there are approximately 52,721,568 Catholics who attend Mass in 2022 (this total includes those who attend more often). That is equivalent to about 3,180 people in the typical parish. A total of 41,957,581 are in households registered with a Catholic parish. Of the aforementioned Mass attenders at Christmas and Easter, 32,950,980 attends Mass at least once a month (this total includes those who attend more often).

The final group includes those professionals involved in ministry (albeit not all in parishes). This includes 141,382 people who are priests, vowed religious, permanent deacons, and lay ecclesial ministers. Technically, that would mean there are 2.1 priests per parish with a total population of 34,923. However, some are religious priests who are less likely to be involved in parish ministry than diocesan priests. Among both these groups there is a significant number who are retired and no longer active in ministry today. When you break things down to active diocesan priests per parish it comes out to about 1.0. Yet these priests are not evenly distributed across dioceses so some do not have enough diocesan priests for there to be one priest assigned to each parish.

Using CARA Catholic Polls (CCP) we can estimate other populations estimates that may be of interest. Some 58.3 million Catholics were born in the United States and 14.9 million were born elsewhere. A total of 48.0 million adult Catholics received the Sacrament of Confirmation. Among Catholic adults, 23.0 million attended a Catholic school at some point when they were young (according to NCEA, 1.345 million Catholic minors are currently attending Catholic schools). There are 4.4 million self-identified Catholics who were not raised Catholic who later converted to Catholicism.

The largest generation of Catholics, currently, are Millennials (19.8 million) followed by Generation X (18.3 million), and then Baby Boomers (15.8 million). A total of 33.7 million Catholic adults are married or widowed, 8.2 million are divorced or separated, and 15.0 million have never married (of which 11.4 million are Millennials).

There are 16.2 million Catholic Democrats compared to 12.4 million Republicans. Yet, there are more Catholic conservatives than liberals (19.3 million compared to 13.7 million). Most adult Catholics are not affiliated with a political party (25.9 million) and 23.9 million consider themselves to be “middle of the road” when it comes to political ideology.

Correction 8/10/2022: A former version of this blog included an estimate for minors who had left the faith. This led to larger estimates of "former Catholics" than is likely. However, we cannot assume the share of minors who have left is similar to the share of adults. Presumably this is less common among children and teenagers.