Ministry Finances in the Midst of Pandemic: A Survey of U.S. Catholic Priests

This is the third in a series of posts CARA has prepared on the effects of the pandemic on the Catholic Church in the United States. The first post provided estimates on how the pandemic is affecting the amount of individual giving to parishes. The second post summarized U.S. Catholic Bishops’ views on how the Church is faring during the pandemic. This, third, post describes how the pandemic is affecting ministry finances from Catholic priests’ perspectives. The following is a summary of selected findings from a national survey conducted by CARA this summer (full report can be found here).

Financial Concerns Related to Covid-19 Pandemic
When asked about their biggest concern regarding the financial health of their parish, school, or other primary ministry, about 16% of responding priests indicated that they are doing fine financially and/or they are optimistic about the financial future of their ministries. Some of them attribute this good financial situation to the continued generous support of their parishioners, successful transition to electronic giving, receiving funds from the Paycheck Protection Plan, as well as financial and strategic support from their dioceses. A few priests stated that they are not concerned about finances, because they are putting their trust in God. A few of these comments are presented below.

However, the majority of priests expressed various apprehensions about the financial well-being of their ministries. Priests were often worried about declining revenue streams (in particular, collections and donations from parishioners). Among those most worried were priests overseeing Catholic schools who were uncertain about future tuition revenue. A few priests noted that they had to cancel fundraising events and, in some cases, suspend fundraising campaigns. Pastors in parishes getting a lot of visitors (e.g., tourists, students, or seasonal visitors) had to further adjust their revenue expectations. Some of these comments appear below.

In consequence of declining revenue streams, priests were worried about their ability to continue on with their ministries. One of the chief concerns regarded the need to lower salaries/benefits and/or terminate/furlough staff. Many of the priests reported that they already had to take those steps while others anticipated that they will need to do so soon. Additionally, some priests expressed concerns about their ability to pay for expenses related to ongoing construction and maintenance. To some of the priests, the main concern was the ability to administer the Sacraments, to support the poor, and to keep schools open. Some examples are below.

Actions Taken to Address the Financial Problems of the Parish
Catholic priests described how their parishes considered and/or acted upon various means of addressing the financial health concerns described above. Specifically, priests were asked to indicate in regard to seven specific actions whether they “considered doing so,” they “considered doing so, but decided against it,” they “are currently deciding whether to do so,” or they “have done so as a result of the pandemic.” Responding priests could also opt to leave the question unanswered, if they have not considered a particular option, or if this option was not applicable to them. The chart below shows the seven actions, ordered from those most likely to have been done to those least likely. 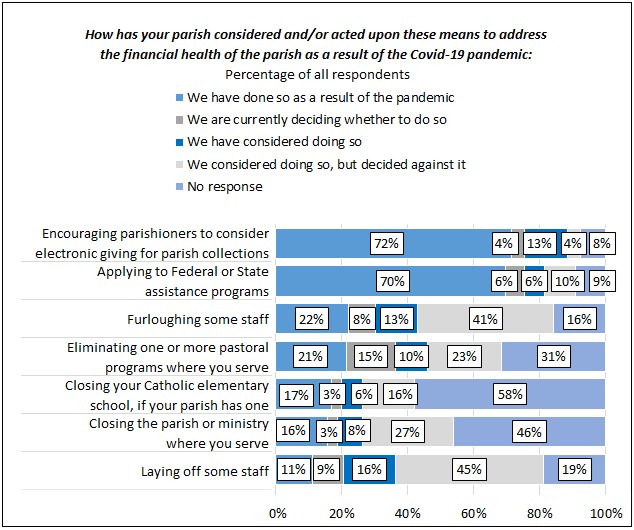 In terms of parishes’ efforts to mitigate the financial consequences of the pandemic, at the time of taking the survey in the summer of 2020, seven in ten priests reported that they have been encouraging parishioners to consider electronic giving for parish collections (72%) and that they applied to Federal or State assistance programs (Paycheck Protection Program, etc.) (70%). One in five priests furloughed some staff (22%) and eliminated one or more pastoral programs where they serve (21%). One in six priests reported that they decided to close their Catholic elementary school (17%) and to close the parish or ministry where they serve as a result of the pandemic (16%). And, one in ten priests (11%) laid off some staff as a result of the pandemic.