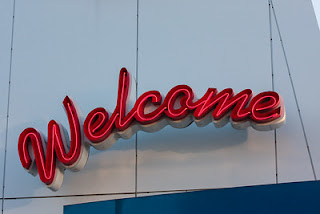 For as far back as we have data (the 1990s), the Catholic Church in the United States welcomed more than 100,000 adults into the faith each year. Most were Protestants who had already been baptized. Some were unbaptized. More often the former than the later.

Times have changed. In 2017 and 2018 there were likely some empty seats in RCIA programs (i.e., the Rite of Christian Initiation of Adults, the process that prepares adults to join the faith). In 2018, 93,621 adults joined the Catholic faith. Of these, 61% were received into full communion and confirmed and 39% were baptized and confirmed. Prior to 2006, a larger share of these new entrants were unbaptized before becoming Catholic. 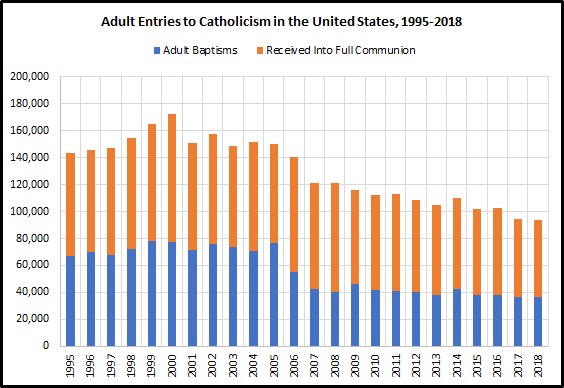 Some of this decline is likely related to declines in marriage and marriages in the Church. As we’ve noted before, more often than not, conversions happen when non-Catholics marry Catholics and choose to become Catholic themselves (this is more likely to happen in dioceses with smaller Catholic population shares). Similarly, we’ve seen fewer infant baptisms in recent years and this is correlated with declining fertility rates in general.

At the same time, this isn’t just about fewer Americans, and presumably Catholics, marrying and having kids. A brief glance at the figure above and one might assume these trends parallel news of the clergy sex abuse crisis in 2002 and the Pennsylvania Grand Jury Report in 2018. But the pronounced declines actually occur in 2001, 2007, and 2017. It is also important to note that these adult entries occur for the most part in Spring and the decisions to convert likely happened at least a calendar year prior before entering RCIA.

We know from research on people leaving the Church, that the sex abuse crisis is not a common reason cited for their decision. Yet, it is unclear if this factor affects those who consider becoming Catholic. This would be difficult to study. It would require one to do a survey of non-Catholics asking them if they are considering (or have considered) becoming Catholic. Then one would ask about what they were weighing in their decision. Presumably, because many become Catholic because they marry a Catholic one could do a survey of non-Catholic spouses of Catholics but it would not give us the full picture.

Although the new adult Catholics each year number less than 100,000 it is important to note that this is equivalent to about five new Catholics per parish every year, on average (they also tend to stay Catholic). A diocese typically receives about 450 new adult entrants, on average. The change in the last year has been small. Even still, in 2018 dioceses likely saw about 25 fewer new adult entrants than they did in 2017.

Thanks to Bart Heird for the welcome sign image.
at 16:15