This post is from CARA's Executive Director Thomas Gaunt, S.J.

This coming year I will mark 50 years as a Jesuit having entered the Maryland Province of the Society of Jesus in 1971 at a time when the Province infirmary was located at the novitiate in Wernersville, PA.  The brothers and priests in the infirmary seemed ancient of age – they were in their 70s and 80s at a time when most American men lived only into their late 60s, and Jesuits even less.  A remarkable achievement over the past 50 years has been the extension of life expectancy – particularly for men, and for Jesuits, in the United States.

The life expectancy for white American males in 1970 was 68.0 years and it would steadily increase year after year to 76.4 years by 2017 (the most recent data).  An 8.4 year increase in longevity over a period of 47 years.  An examination of the necrology of the Maryland Province Jesuits (a listing of all the deceased Maryland Province Jesuits that is maintained so that we might remember them in prayer on the anniversary of their death) shows that the average age of death between 1961 to 1970 was 66.2 years.  In 1970 the Jesuits had an average life span of about 1.8 years less than other men.

If we fast forward to 2017 the average age of death for Maryland Jesuits had increased to 83.7 years, or 7.3 years more than other men.  What is happening here?  The following graphs show the number of Jesuits who died in each decade and their average age at death.  The Center for Disease Control calculates the life expectancy for men and women by ethnicity each year - the life expectancy at the end of each decade is presented in the table below.  An actuarialist will note that these are not exactly comparable calculations, but they are close. 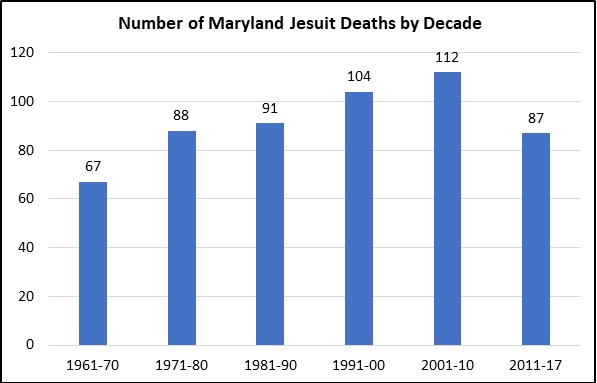 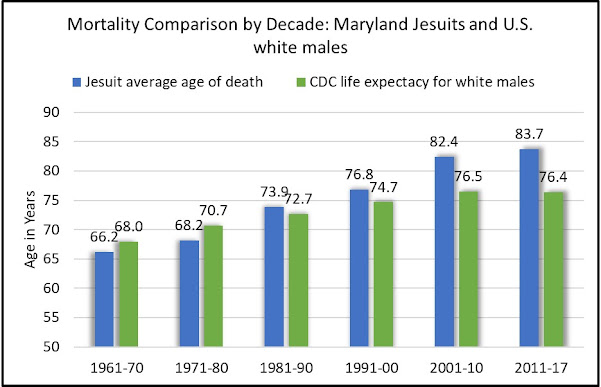 In 1970 the Maryland Jesuits were living 1.8 years less than other American males and this increases to 2.5 fewer years by 1980.  Jesuit longevity then reverses itself by 1990 when Jesuits are now living just over a year longer (1.2 years) and begins to steadily increase to 2.1 years in 2000, 5.9 years in 2010, and 7.3 years in 2017. While the life expectancy for American men increased by about 8 ½ years between 1970 to 2017, the Maryland Jesuits increased their longevity 17 ½ years, double the average gain of American men over the same 47 years.

In recent years there were major studies on the relationship of one’s marital status to longevity, in 2006 in the Journal of Epidemiology and Community Health there was an article “Marital Status and Longevity in the United States Population” by Robert Kaplan and Richard Kronick.  They investigated the relation between marital status and longevity.  They summarize their research findings saying, “controlling for demographic and socioeconomic characteristics, the death rate for people who were unmarried was significantly higher than it was for those who were married and living with their spouses. Although the effect was significant for all categories of unmarried, it was strongest for those who had never married. The never married effect was seen for both sexes, and was significantly stronger for men than for women.”  Concluding that “current marriage is associated with longer survival. Among the not married categories, having never been married was the strongest predictor of premature mortality.”

So, what might be going on here?  Jesuits (who are never married) are living considerably longer that other U.S. males (married and single), and even longer in comparison to single never married men. Kaplan and Kronick pay particular attention to the social isolation that may occur with those who are never married.  They write:

Our study raises a series of new questions. Firstly, we found that having never been married is a better predictor of poor health outcomes than either divorce or widowhood. Secondly, the impact of social isolation is not constrained to the elderly. In fact, it is comparatively stronger early in life. This phenomenon may have been overlooked in previous studies because early death is uncommon…. Finally, our findings challenge the belief that the effect of social isolation is upon diseases of the heart. Our findings underscore the impact on all cause mortality. Furthermore, the predominant cause of death associated with social isolation differs at different stages of the life cycle.

Kaplan and Kronick’s conclusion that having never been married impacts the longevity of men fits the Jesuit data in the 1960s and 70s when Jesuit longevity was 1.8 to 2.5 years less than other men.  But, from the 1980s on the reverse has occurred as the never married Jesuits increase their longevity over other men by more than 7 years by 2017.

For the Jesuits of the Maryland Province, and the Jesuits throughout the world, there was a renewed focus on the importance and value of community life in the late 1960s and 70s.  A change of customs and habits in the day to day living of Jesuit life together did not come quickly or without turmoil, but greater attention to how we share life together, both in prayer and in conversation, along with support for one another has evolved over the decades.  Greater attention was also given to the use of tobacco and alcohol (important factors for healthy living).

In 2016 at the Jesuit General Congregation this renewed focus on community life was stated as: “The Jesuit community is a concrete space in which we live as friends in the Lord. This life together is always at the service of mission, but because these fraternal bonds proclaim the Gospel, it is itself a mission.” (GC36, D. 1, No. 9) To be “friends in the Lord” is a renewed part of the mission of Jesuits in recent decades – quite the opposite of social isolation.

Community life in the Jesuits, or just about any Religious Institute, not only counteracts the harmful impact of social isolation for those who never marry, but may well enhance the benefits of social connectedness for longevity.

Documents of General Congregation 36 of the Society of Jesus.    Decree 1, No. 9.  hthttps://jesuits.eu/images/docs/GC_36_Documents.pdf