Overall, the number of Catholic religious sisters is in decline but rising in Africa and Asia. In 1975, there were 968,526 religious sisters globally. In 2019, there were 630,099 representing a decrease of 35%. Compared to 1975, North America has 70% fewer sisters, Europe 60% fewer, and Oceania 60% fewer. At the same time, the number of sisters in Africa and Asia have more than doubled increasing collectively by 139%. 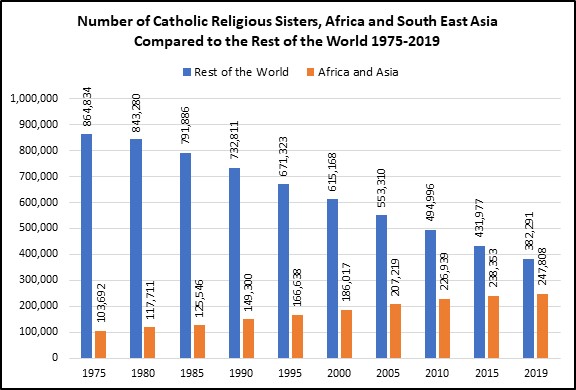 The only other two areas where the number of sisters is increasing during the 1975 to 2019 period are in Central America (the Catholic Church includes the Caribbean and the countries from Mexico to Panama in this region). Yet the growth is slower here at 14%.

One of the most interesting countries is India where there are more religious sisters than in any other country (16% of all the religious sisters in the world). The number of sisters in 1975 in India was 41,868 and this had grown to 99,282 in 2019. The number of sisters grew during this period by 137% as the number of Catholics increased by 145%. Thus, in 1975 there were 45.6 sisters per 10,000 Catholics in India and 44.2 in 2019. This represents a relatively stable vocation rate in a country with a lot of population growth.

This post is authored by Michal Kramarek, Ph.D., CARA Research Associate. It is the second post in a series of three that explore trends in the enrollment, in Catholic formation programs, in the United States. The first post focused on the priestly formation (it can be found here). This post provides a brief preview on permanent deacon formation. It is based on a larger new study about Catholic deacons’ formation in the United States. The full overview of the findings is available for free here. This research was commissioned and funded by the Catholic Communications Committee.

The number of permanent deacons in the United States has grown steadily since the restoration of this ministry in the years following the Second Vatican Council. According to the Official Catholic Directory, there were 58 permanent deacons in the country, in 1972. This number grew to 18,291 by 2019. The last couple of years saw small declines (of 1% in both 2019 and 2020). Based on the trend since 2003, there will be projected 19,478 permanent deacons ±960 (CI=95%) in 2026. 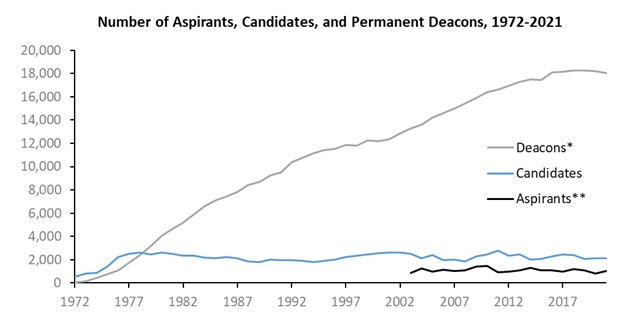 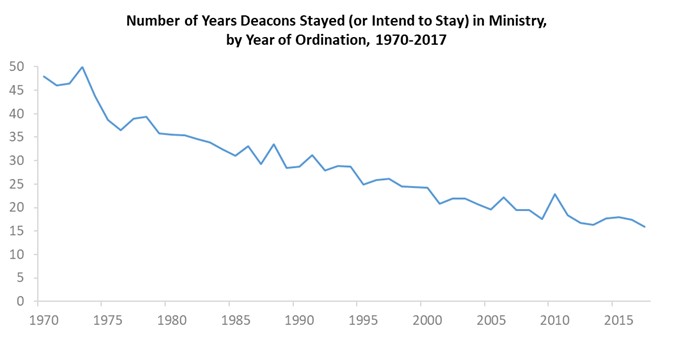