An election poll that focuses on Catholics has been hard to come by in 2020. That is until this week. A Real Clear Opinion Research poll, conducted in October of 1,490 Catholics who are likely to vote, provides some interesting insights. The study, commissioned by EWTN, indicates a swing towards Democrat Joe Biden. The vote in 2016 was so close among Catholics it was hard to discern which way they had voted. Polls didn’t agree. 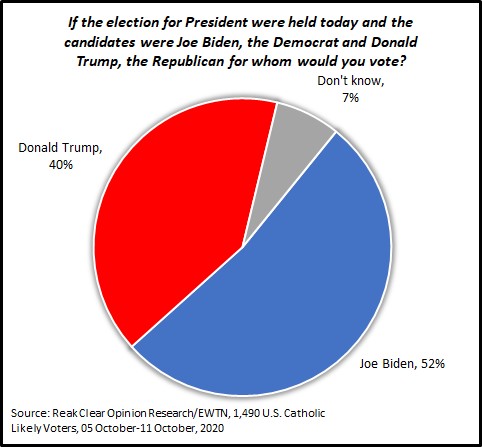 In the current poll, which has a margin of error of ±2.8 percentage points, 48% of likely Catholic voters recall voting for Donald Trump in 2016 and 46% recall voting for Hillary Clinton. In the upcoming 2020 contest, 52% of these likely voters plan on voting for Joe Biden and 40% for Donald Trump. Forty-five percent of respondents self-identify as Democrats and 36% as Republicans. Forty percent of respondents say they are conservatives, 36% liberals, and 24% moderates.

If accurate, these results could be a bad sign for the Trump campaign. The winner of the Catholic vote typically wins a majority of the popular vote, although the Electoral College may result in the candidate with fewer votes nationally winning the presidency. State-level results for the Catholic vote did play an important role in 2016. Trump won the vote of Catholics in Ohio, Michigan, Iowa, and Florida. Trump’s lead among Catholics was a necessity for winning Michigan and Florida—two states he needed to be elected. Both were 1 percentage point races overall and Trump won Catholics in Michigan by 18 percentage points and by 10 percentage points in Florida. According to the Pew Religious Landscape study, 18% of Michigan’s adults are Catholic as are 21% of Florida’s adults. Thus, Trump would not have had the Electoral College votes to win the presidency without the votes of Catholics in Michigan and Florida.

In predicting the 2020 outcome, state polls may be more important than national surveys. There is also the possibility of social desirability bias affecting the polling. Some who may end up voting for Trump may not accurately share this intention with pollsters because they feel like this is socially undesirable in the current political climate. This happens most often when the poll is conducted with a interviewer over the phone or in person. Self-administered surveys tend to minimize social desirability bias. The Real Clear Opinion Research/EWTN study does show some social desirability effects but this is only observable in Mass attendance reports. Thirty-eight percent of respondents report weekly Mass attendance prior to the pandemic. Surveys conducted without interviewers find only about 22% of adult Catholics attends this frequently.

Biden's 12 percentage point lead is large and well outside the margin of error. It appears the Catholic vote may not be as close in 2020 as it has been in other recent presidential elections.

Some of the other interesting findings from the survey include:

Note: If you are a regular reader of this blog you already know that I (CARA researcher Mark Gray) am a political scientist and pollster who is profoundly apolitical. CARA is also an independent non-partisan research center. I am not registered to vote nor will I be. I am neither a Democrat nor a Republican. In political analysis and forecasting I always try to stick solely to the data.