Ministry in the Midst of Pandemic: A Survey of U.S. Catholic Bishops 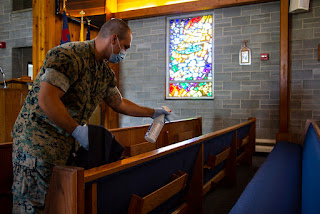 Just how badly has the Covid-19 pandemic hit the United States Catholic Church? And after taking such a hard hit financially, how can U.S. bishops help parishes be “field hospitals” for the sick during a time of so much need?

According to a 2020 CARA survey, U.S. bishops report that many arch/dioceses, eparchies, parishes, and Catholic schools have been greatly affected by the Covid-19 pandemic, especially in the areas of sacramental celebrations, rites, and preparation; and financially (as estimated in our previous post). A lesser but still substantial proportion of dioceses report being greatly affected in the areas of the morale of parish and diocesan/eparchial personnel and in their Catholic Charities organizations’ abilities to serve those in need.

To address these challenges, dioceses and eparchies have enacted/issued and/or are considering a wide variety of remedies including: pastoral guidance from bishops about how to provide for sacramental needs while adhering to local and state guidelines and ordinances, helping parishes apply for governmental aid, encouraging parishioners to consider giving to their parishes electronically, offering Catholic schools help with providing distance learning to students, helping parishes host online Masses, adapting the assessments parishes pay to their dioceses, eliminating or curbing diocesan programs, and closing some Catholic schools or parishes.

How large of an impact has the pandemic had on U.S. Catholic dioceses, eparchies, parishes, and charitable organizations?

In Spring and Summer 2020, CARA conducted a survey concerning how the Covid-19 pandemic had impacted U.S. arch/dioceses, eparchies and parishes.[1] Some 116 bishops of U.S. arch/dioceses and eparchies responded, for an overall response rate of 59%.[2]

Bishops were asked how significantly their dioceses and eparchies were affected in a number of areas, with their responses summarized in Figures 1 and 2. The dark green-portion of the bars below show the percentage of dioceses or eparchies saying an area was “very affected,” with the light green-portion of the same bars showing those areas “somewhat affected.” 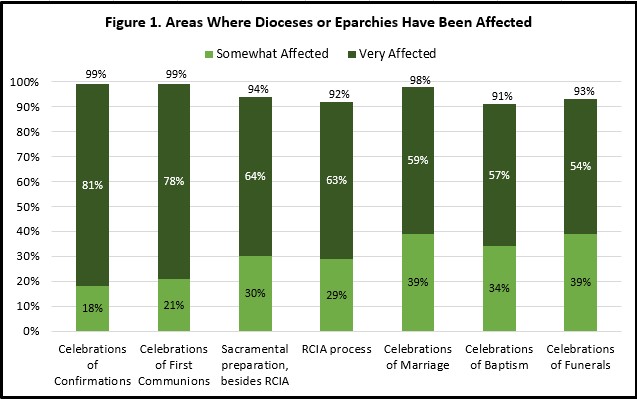 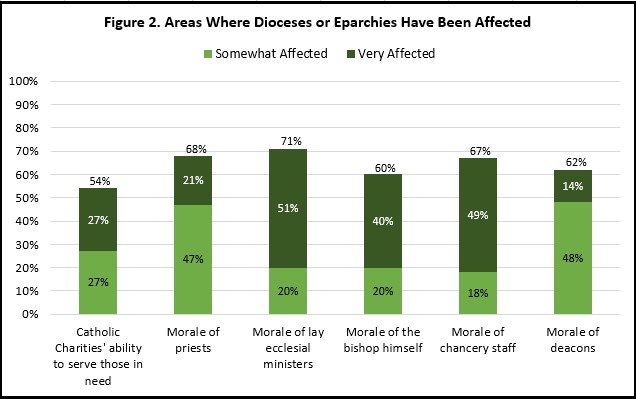 Figure 2 shows those areas relatively less likely to be affected, which include the morale of various chancery and parish personnel as well as the effectiveness of the services of dioceses’ or eparchies’ Catholic Charities organizations. Note, however, that even among these areas more than half are “somewhat affected” and “very affected” combined.

How have dioceses and eparchies responded to the sacramental and financial difficulties posed by the pandemic?

In open-ended questions, bishops were asked to write in how their dioceses and eparchies have been managing sacramental and financial difficulties. Concerning the sacramental issues facing parishes, bishops are most likely to mention issuing guidelines for pastors and parishes and having granted dispensations to parishioners from their obligation to attend weekly Mass. Most bishops also report having instructed their parishes to follow the ordinances of and guidance from federal, state and local officials in terms of gatherings.[3]
Concerning the financial health of both the diocese/eparchy and its parishes, bishops wrote in that they are most worried about parishes not having their regular offertory collections, the financial health of parishioner households, paying parish and chancery staff members in the short- and long-run, and whether to cut back or eliminate existing parish and diocesan programs.

Figure 3 below shows the findings for whether dioceses and eparchies have either taken an action or are in process of deciding whether to take an action. 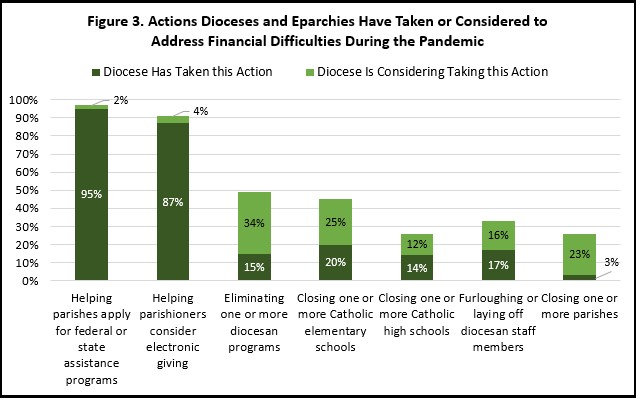 Two major ways that dioceses and eparchies have been helping their parishes counter these financial difficulties are by helping parishes apply to federal and state programs (such as the federal Paycheck Protection Program) and encouraging parishioners to consider electronic giving for their parishes’ offertory collections. In addition, in a separate open-ended question, a majority of dioceses wrote in that they have either adjusted the percentages that parishes pay to their dioceses in annual assessment fees or are in the process of figuring out what kinds of adjustments should be made.

What dioceses and eparchies have been relatively less likely to consider is also of consequence: closing some Catholic elementary schools, high schools, or parishes (45%, 26%, and 26%, respectively, have either done so or are considering doing so).

Finally, bishops were asked how much they have helped parishes and Catholic schools with the technological difficulties they have encountered during the pandemic. Nine in ten say their dioceses or eparchies have “somewhat” (12%) or “very much” (79%) helped their Catholic schools provide distance learning to their students, and more than eight in ten have “somewhat” (22%) or “very much” (62%) helped their parishes provide online Masses for their parishioners.

What does the future hold?

The pandemic is, of course, an ongoing phenomenon. As dioceses and eparchies take other actions as circumstances change, CARA hopes to provide summaries of those challenges and actions as well.

[1] A survey of parishes is also currently in the process of being conducted. CARA is also surveying Catholic young adults nationally about how they have been practicing their faith during the pandemic and how they see themselves practicing in the future once the pandemic is over.
[2] Please note: a complicating factor for these data is that some dioceses responded early on during the pandemic (May 2020) while a few others responded as late as early July 2020. Also, some coastal U.S. dioceses experienced the pandemic before many others in other parts of the country did.

[3] This question was not directly asked on the survey, but was mentioned by many bishops in an open-ended response.
at 14:15