Time is up! We are all moving on and 2020 does not get to come along with us… Some final observations:

The Year Without a Church Easter and Christmas
CARA uses its polling data and Mass related search terms to estimate Catholic Mass attendance each week. The figure below shows these estimates from January 2019 to the Christmas weekend in 2020. The 2019 data looks like many past years with spikes in attendance around Ash Wednesday, Easter, and Christmas as well as other days of obligation. Christmas tends to have the highest attendance of the year. 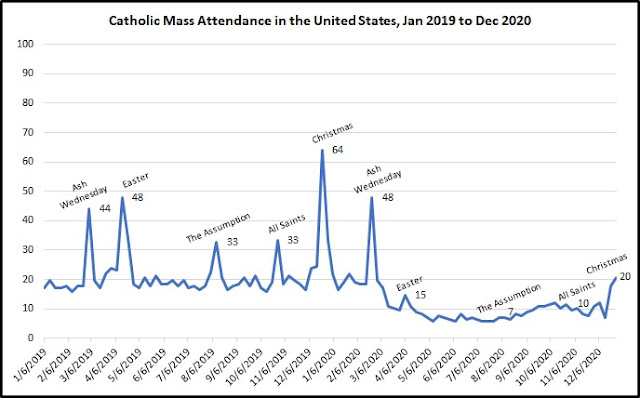 In 2020, the year started off with the typical pattern we’d expect with 48% attending Ash Wednesday services on February 26. Yet, in the first weeks of March restrictions and lockdowns began to take effect to combat the spread of the Covid-19 virus. Only a slight spike up to 15% appeared at Easter. From there it has been a long stretch of very low Mass attendance. Christmas 2020 represented the highest level of Mass attendance since Ash Wednesday at 20%. That is similar to attendance in a typical non-holiday week in 2019.

Nearly Final Counts on the Catholic Vote
CARA averages the major polling estimates for the vote of Catholics in presidential elections. The figure below shows the trends since 1952. Currently, president-elect Joe Biden has a two-point edge over President Trump. We use “currently” because there are still two academic surveys that have yet to report that we have included in past averages. On three occasions since 2000, the vote of Catholics has been evenly divided with a 1 percentage point or less difference, which we tally as a tie. It is possible, as with 2016 that the academic post-election surveys may move 2020 into this column. 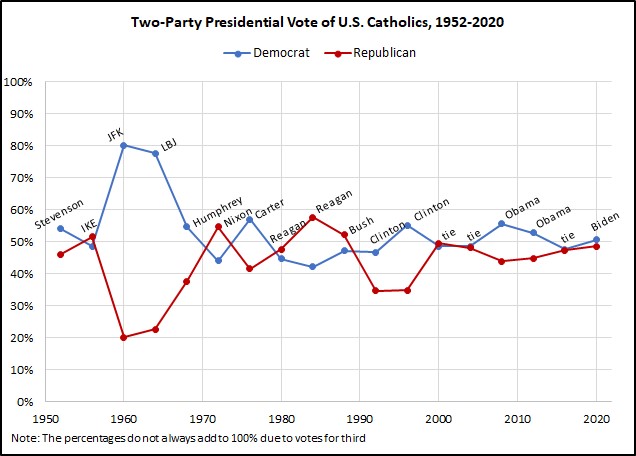