This post is authored by Michal Kramarek, Ph.D., CARA Research Associate. It is the third and final post in a series that explore trends in the enrollment, in Catholic formation programs, in the United States. The first post focused on the priestly formation (it can be found here). And, the second post looked at the permanent deacon formation (it can be found here). This post provides a brief preview of lay ecclesial ministry formation. It is based on a larger new study about Catholic lay ecclesial ministry formation in the United States. The full overview of the findings is available for free here. This research was commissioned and funded by the Catholic Communications Committee. 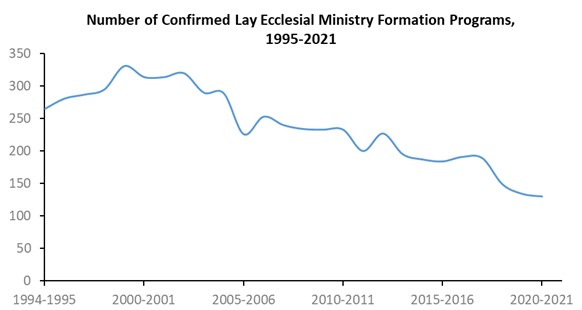 In terms of racial and ethnic background, Hispanics/Latinos and White/Anglo/ Caucasians make up two in five candidates in lay ecclesial ministry formation programs (44% each). Blacks/African Americans constitute another 3%, while Asian/Pacific Islanders make up 5%. Others (including Native Americans) make up 4% of enrollees in these programs. Based on the trend since the 2002-2003, the share of Hispanics/Latinos is projected to increase to 68% ±12% (CI=95%) in the 2025-2026 academic year.