This post is by CARA Executive Director Thomas Gaunt, SJ and is the fourth post in a series (1, 2, 3) in which CARA tracks changes among the Jesuits worldwide.

The Jesuits are the world’s largest religious order with active ministries spanning across six continents. They steadily increased in number from their restoration in 1814 until 1965 when they reached their peak membership of 36,000. Since 1965 the total number of Jesuits worldwide has declined to 14,839 in 2020 but most notably the membership of the Jesuits has dramatically realigned by culture and ethnicity. Recent developments show a change in growth and expansion of the population of Jesuits: the largest national group used to be the Jesuits of the United States, but now is the Jesuits of India. Africa and Asia have numerous young Jesuits, whereas Europe and North America are challenged by a large number of elderly Jesuits.

For administrative purposes the Society of Jesus is organized into 72 provinces and independent regions. They then grouped into six geographic conferences or assistancies:

Both Africa and South Asia are showing steady increase in the number of Jesuits, while both Latin America and Asia Pacific are decreasing in numbers. The Assistancies of Europe and North America show a steep decline in membership, nearly 50% over the same 20 years. In 2021 the South Asia Assistancy is the largest in number of Jesuits. 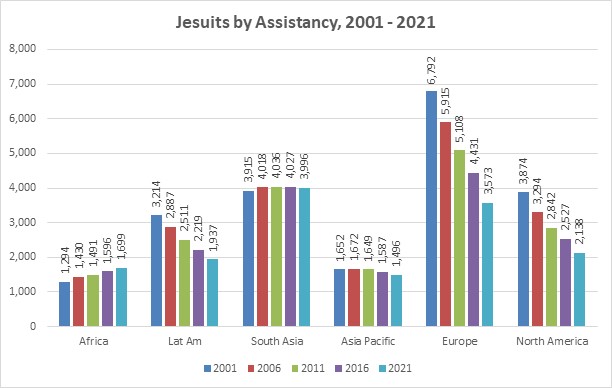 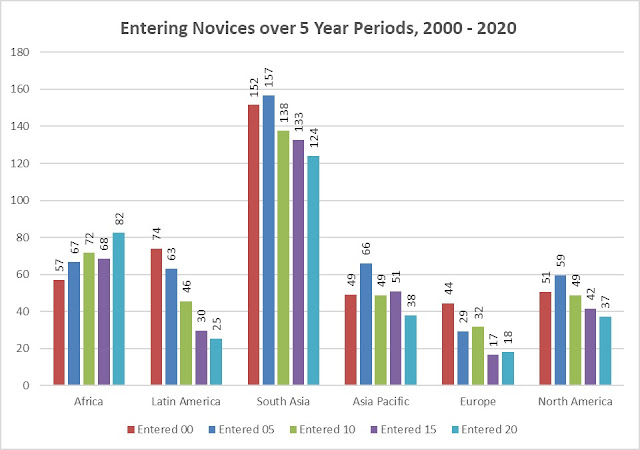 The distribution of entering novices has two in five entering in South Asia (30%) or Asia Pacific (10%). One in four novices are entering in Africa (26%) and one in seven in Latin America. North America has about one in eight of the new novices and Europe one in twelve. 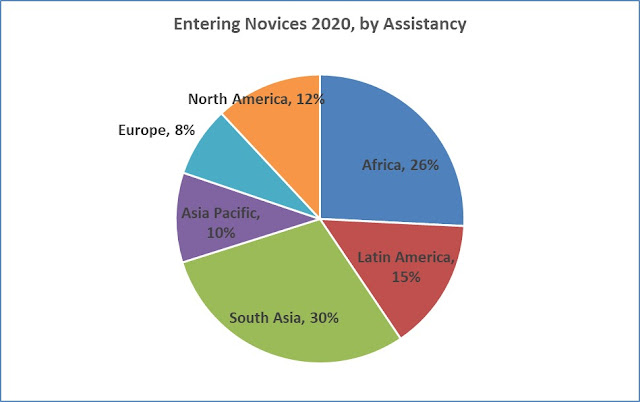 Departures from the Jesuits:
The Jesuits, like all other religious institutes experience a departure of a large number of the men who enter the novitiate, these departures usually occur in the years of formation before ordination (often ten years after entering) or final vows (often 15 to 20 years after entering). The general pattern of departures follows the earlier pattern of entrances for each assistancy, and the number of departures across the assistancies are close to what they were 5 years ago, and markedly lower than the past number of departures 15 or 20 years ago. 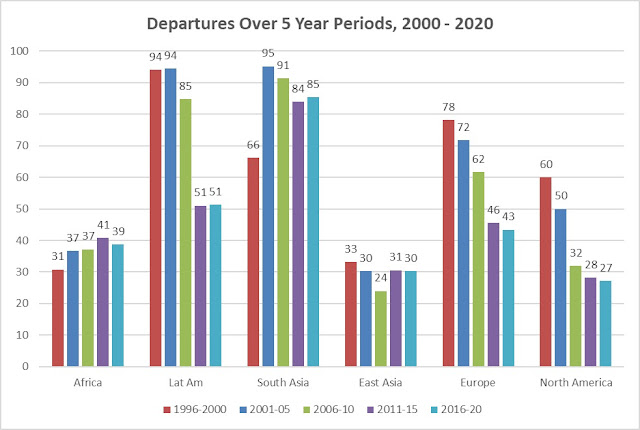 Entrants minus Departures:
The sustainability of the membership of a religious community relies on their being more entrances than departures over the course of years. The graph below shows the gain or loss for each assistancy of the Jesuits in five-year periods over the past 25 years.  South Asia and Africa have had large sustained gains in members in each period of time. Asia Pacific has shown a smaller, but diminishing gain, and Europe a diminishing gain that currently zeros out. Latin America has fluctuated between small gains and losses, whereas North America shows stable gains over the past 20 years. 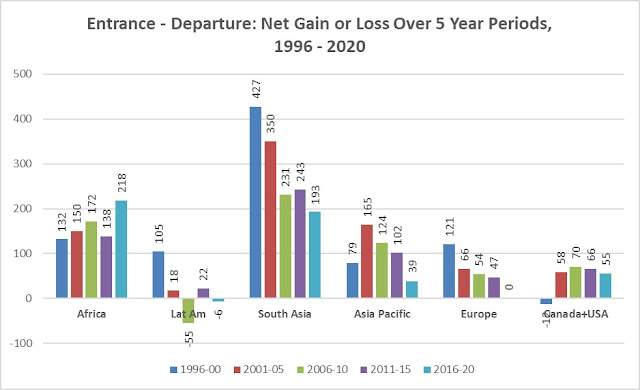 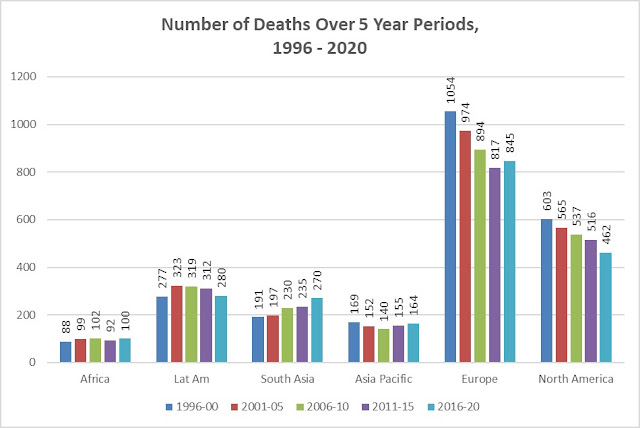 Entrances minus Departures minus Deaths: Net Gain or Loss
When the number of men leaving the Jesuits is subtracted from the number entering and then the number of deaths are subtracted from that figure, we have the net gain or loss in Jesuit membership. In combining these three basic demographic elements we see clearly the large and continuous impact of the declining number of Jesuits in Europe and North America, and to a lesser extent Latin America.  South Asia and Asia Pacific have recorded gains and losses and both are currently posting losses. Only Africa consistently records any net gain in Jesuits year over year, and that gain is dwarfed by the losses of Europe and North America. While Africa may have a net gain of 118 Jesuits over a five-year period, Europe, North America, and Latin America have a net loss of more than 1,500 Jesuits. 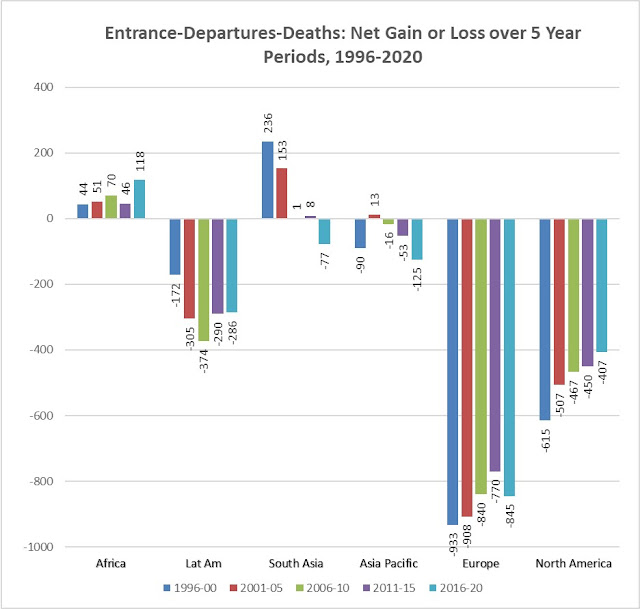 Observations:
The membership trends observed three years ago have changed: the number of Jesuits is declining across the board in all parts of the world except Africa; there is a notable decline in the number of men entering the novitiate, accompanied by a small increase in the numbers of deaths, which makes for a greater net decrease over time.

The continued growth in the number of younger Jesuits in Africa and South Asia means that there will be a continuing re-alignment of where Jesuits are serving the Church. In 2021 61% of Jesuits are in South Asia, Latin America, Africa and Asia Pacific and only 39% are in Europe and North America. If the trends continue, the Society of Jesus will be defined more by the cultures and experiences of Asia and Africa, and less by Europe and North America.